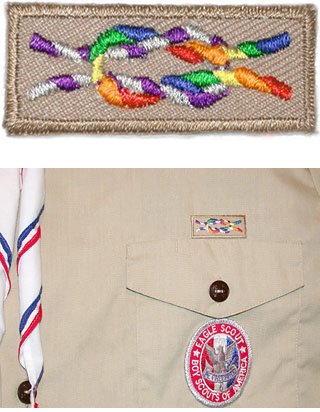 “You earn it by wearing it”

Introduced in 2002, the Inclusive Scouting Award is a way to show support for those who have been threatened with exclusion from Scouting in the United States because of the membership policies of the Boy Scouts of America. It signals that even though you wear the uniform, you disagree with any discriminatory membership policies that may exist and aren’t afraid to show it.

Many people have asked whether this award is still necessary, given that the BSA ended their blanket ban on gay adults in July of 2015. The simple answer is “yes, absolutely.” Keep in mind that units chartered by faith-based organizations may still discriminate, and that a policy change doesn’t imply an instantaneous change in the hearts and minds of Scouting volunteers and professionals. The ISA also identifies the wearer as an ally – someone who is “safe” to approach and someone with whom you can be open and honest. In this way, it is modeled after the “safe space” programs used in high schools over the last decade, which have been shown to reduce stress for marginalized youth even if they never speak to someone – just knowing that an ally is present is a significant relief.

The two ropes of the square knot symbolize religion and sexual orientation, and the knot reflects ways in which the two issues are intertwined. One rope is silver and purple – colors the BSA reserves for religious emblems. The other rope is rainbow-colored – a pattern that is representative of diversity in general and is used widely in the lesbian, gay, bisexual, and transgender (LGBT) communities as a symbol of pride and unity.

It’s usually worn on the uniform in the same manner as any other adult leadership awards, though it is unusual in that it is earned by the act of wearing it, which necessarily involves risk and requires courage given BSA’s currently unpredictable tolerance for dissent. By displaying this emblem, you set a positive example and help to create a friendlier and healthier environment for everyone in the Scouting program.

“A number of other Scouts and Scouters have asked me why I am taking a stand for Inclusive Scouting when BSA has no problem with me personally. I tell them because it is the right thing to do. If I don’t take action in support of my values and beliefs, how can I say I truly believe in them?” – a Scouting parent and Scouter

“If we would remain a nation, we must stand by one another.” – The Legend of the Order of the Arrow

Thank you for supporting a fully inclusive Scouting program!

Please note that orders are fulfilled by volunteers, so it may take up to 4-6 weeks to receive your order. If you need it quicker than this or have questions on an order that was placed prior to June 13, 2021, please email us at specialorders@scoutsforequality.org to inform us of your situation.