Today, as Chris Geidner at BuzzFeed News is reporting, the Greater New York Area Councils of the Boy Scouts of America confirmed that it has hired Pascal Tessier, an openly gay adult Eagle Scout and member of Scouts for Equality. The announcement suggests that the Boy Scouts of America is not enforcing its policy of prohibiting adult gay leaders from employment. In light of this, Zach Wahls, Executive Director of Scouts for Equality, issued the following statement:

This is a watershed moment. For the first time in the history of the Boy Scouts, an openly gay adult will join their ranks as a camp counselor. Pascal Tessier was the first out gay scout, and now it appears that he will also be the first out gay leader.

But if the Boy Scouts of America National Council steps in to force the Greater New York Councils to rescind their offer to hire Pascal, it will represent a boldfaced example of employment discrimination on the basis of sexual orientation, which is illegal in New York State.

As the controversy swirling in Indiana, Arkansas, and elsewhere demonstrates, Americans are no longer willing to tolerate discrimination based on sexual orientation. We affirm the inherent worth and dignity of all people, and we expect our leaders–and future leaders–to do the same.

We are proud to see such an important Boy Scout council standing up for the full inclusion of gay members and affirming that the values and principles of scouting are important to all people regardless of sexual orientation or age. We are proud of them for living up to the full promise of Scouting. And we’re proud to be working with Pascal as he stands up for his rights as protected by law.

BSA backtracks on promise, requires all gay scouts to register as adults after age 18

The Boy Scouts of America have rescinded their promise to include gay youth up to the age of 21 in some of their programs. Now all scouts above the age of 18 will be required to register as adults.

This means that those gay Scouts who were between the ages of 18 and 21 are now no longer eligible. 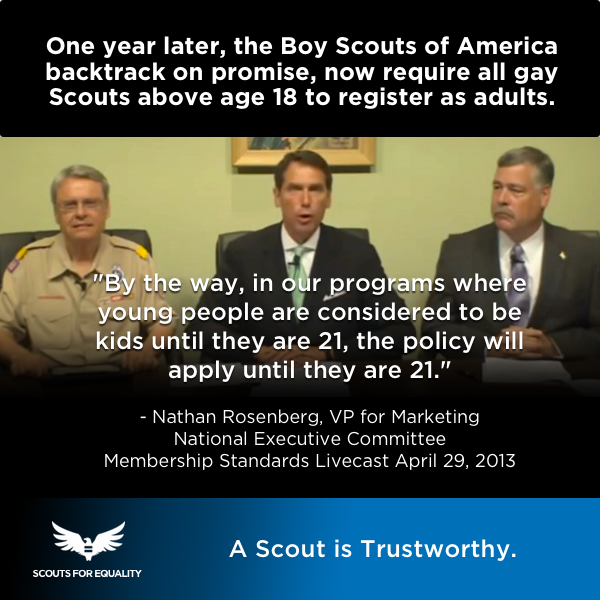 It’s a sad day for Scouting when the BSA backtracks on a promise. We were taught that “A Scout is Trustworthy”.

Included is a clip where Nathan Rosenberg (BSA Executive Committee) pledges to include gay youth up to 21 in last year’s Membership Standards Livecast:

Twins August and Liam Easton-Calabria have been in Scouting since they were 11 years old. They even earned the exact same merit badges on the trail to Eagle. But now one faces getting kicked out because they have reached age 18: August is straight, while Liam is gay.

Today, Scouts for Equality called upon the Boy Scouts of America to rehire ousted Eagle Scout Garrett Bryant, who was refused reinstatement as a camp counselor after a rumor spread that he was gay. The move comes less than a month after the BSA revoked the charter of a Seattle-area troop for refusing to fire Geoff McGrath, an openly gay Scoutmaster.

“Bob Gates, the BSA’s incoming President, knows that ‘don’t ask, don’t tell’ just doesn’t work,” said Zach Wahls, Executive Director of Scouts for Equality. “A policy of discrimination at any level results in the sort of fear we see at work in the Scouts’ ouster of Garrett. Garrett is an exemplary Scout who should be rehired immediately.”

Bryant, who is 19 years old, is a youth member of a BSA Venturing Crew in Flagstaff, Ariz., where he is attending Northern Arizona University. As a youth member, he falls under the BSA’s recently adopted policy allowing the participation of all youth members, regardless of their sexuality.

“If the Scouts were to call me tomorrow and offer to rehire me, I’d do it in a heartbeat,” said Bryant. 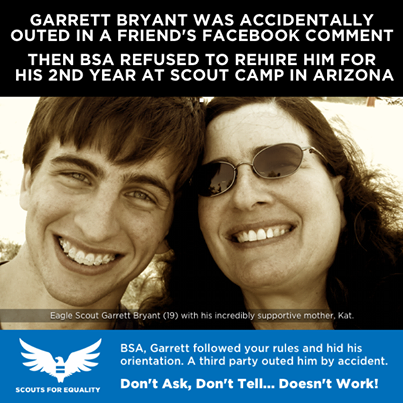 A “Don’t Ask, Don’t Tell” policy didn’t work in the US Military and it doesn’t work in Scouting.

If you are having similar issues with the BSA’s policy, Scouts for Equality wants to hear about it. Check out our Guide to Coming Out for Scouts and use the form to tell us about your issues: http://scoutsforequality.com/comingout

END_OF_DOCUMENT_TOKEN_TO_BE_REPLACED

In Campaign Events
Campaign News
In the Press 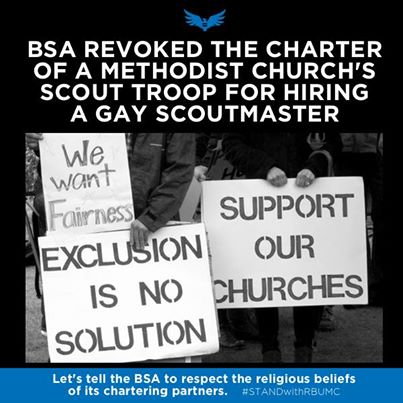 In a startling and discriminatory move, the Boy Scouts of America (BSA) revoked the charter of Seattle Troop 98 and Pack 98 for its refusal to remove gay Scoutmaster Geoffrey McGrath. The BSA revoked the charter of Rainier Beach United Methodist Church’s (RBUMC), a Seattle church whose two Scouting units serve a neighborhood with few other positive opportunities for local youth.

“The Boy Scouts’ decisions only serve to hurt a group of boys who need the values and leadership of someone like Scoutmaster McGrath,” said Zach Wahls, Executive Director of Scouts for Equality, a national organization dedicated to ending the BSA’s ban on gay members and leaders. “Unfortunately, the BSA’s decision calls into question its commitment to leadership and values by perpetuating an outmoded policy rooted in fear and discrimination. History will show that today’s announcement is a self-inflicted wound.”

The controversy surrounding Troop 98 emerged in March, when an NBC News report on the inclusive troop prompted the BSA to question the sexual orientation of Scoutmaster Geoffrey McGrath. McGrath, abiding by the Scout’s commitment to trustworthiness, acknowledged his sexual orientation to the BSA, which in turn, responded by revoking McGrath’s status as Scoutmaster.

END_OF_DOCUMENT_TOKEN_TO_BE_REPLACED

Pascal Tessier, America’s first openly gay Eagle Scout, has launched a Change.org petition asking Amazon.com to temporarily withdraw its support of the Boy Scouts of America until the BSA ends its ban on gay leaders.

Tessier’s petition comes just two days after Geoffrey McGrath—an Eagle Scout, husband and Scoutmaster—became the first gay adult to be removed from the Boy Scouts of America since the organization’s vote in May of 2013 to end its ban on gay youth. Working with Scouts for Equality, the national campaign to end discrimination within the Boy Scouts of America, Tessier’s petition has already accumulated 15,000 signatures and the number of signatures is growing fast.

“After the removal of Geoff McGrath on Monday, it’s clear that Scouting still isn’t a safe place for LGBT+ adults and parents,” said Pascal. “This is both a wake up call and a personal slap in the face to me. Last year’s vote showed that members of the BSA are ready for full inclusion. In four months when I turn 18, I’ll receive the same letter Geoff did, and I will be kicked out of Scouting. This has to stop, and Amazon can help.”

Amazon is a groundbreaking company with an HRC Corporate Equality Index score of 90, and Jeff Bezos is a strong ally of the LGBT community. Amazon’s website clearly states that: “Organizations that engage in, support, encourage, or promote intolerance… are not eligible to participate.”

“As the son of a same­-sex couple, I saw first hand as a youth that gay adults can be a positive part of Scouting,” said Zach Wahls, an Eagle Scout and co­founder of Scouts for Equality. “Removing Geoff sends the wrong message to young Scouts. Discrimination is never okay, and it has no place in our movement.”

Since Scouts for Equality’s founding in 2012, seven major corporate sponsors of the Boy Scouts of America have ended their partnerships with the organization, including Lockheed Martin, Walt Disney World, Caterpillar, Major League Soccer, Merck, Intel and UPS.

In Campaign Events
In the Press

Geoff McGrath, a gay Scoutmaster and Eagle Scout in Seattle, has membership taken away by BSA for leading scout troop which is hosted by open and affirming Methodist church

Geoff McGrath, 49, leader of Troop 98 in Seattle’s Rainier Beach neighborhood, is believed to be the first gay adult to be booted from the Boy Scouts of America since it held a controversial ballot last May allowing gay youth—but not adults—to participate in one of the country’s most popular youth organizations. The Scouts had severed ties with gay adults in previous years, before the vote to admit gay youth, but McGrath, an Eagle Scout, had been hoping for a different response in this new era of Scouting. 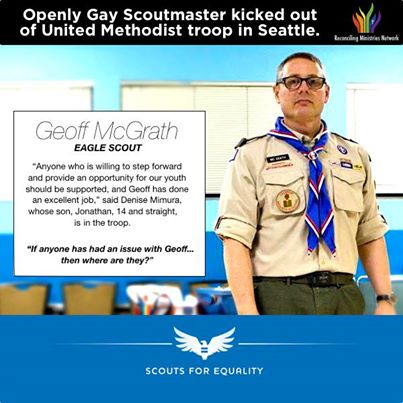 END_OF_DOCUMENT_TOKEN_TO_BE_REPLACED

In In the Press 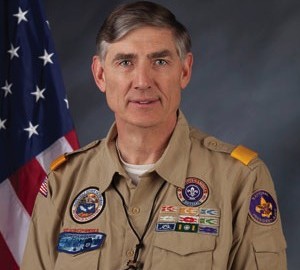 Our policies must be based on what is in the best interest of our nation’s children.

END_OF_DOCUMENT_TOKEN_TO_BE_REPLACED

In In the Press

63% of US adults agree with Scouts for Equality

“Today’s Washington Post/ABC News poll demonstrates that there is overwhelming support in this country for the Boy Scouts of America’s effort to end discrimination within its organization. 63 percent of adults agree with Scouts for Equality that it is time that all scouts be treated as equal,” said Zach Wahls, Eagle Scouts and Founder of Scouts for Equality. “ This is why over the next two weeks leading up to the historic vote on May 23rd, we will work with our partners and over 11,000 members to do everything we can to make this a reality. The poll also demonstrates that the majority of Americans agree that while is this is a critical step, this fight cannot and will not end until every scout, scout leader and parent are welcome making BSA the strongest it has ever been.”
END_OF_DOCUMENT_TOKEN_TO_BE_REPLACED